The concept of automation has been around for decades, yet there still remains a great deal of ambiguity and confusion around exactly what it entails. The fact is, IT process automation comes in many different forms, and is often referred to by a number of somewhat interchangeable terms, such as run book automation or simply IT automation. We thought it might be helpful to clarify things by delving into the various classes and capabilities of this advanced technology.

For all intents and purposes, IT process automation can be categorized into three main classifications:

When it comes to level of importance, humans still rank well above machines, at least for the time being. How humans work together remains a fundamental component of a successful business operation, so it’s natural for many to view IT process automation from a more human-centric approach. Specifically, the role that automation plays in areas such as the service desk, where automated workflows and incident management support have become par for the course.

Likewise, the rise of self-service automation, the application of ITIL best practices and the adoption of service catalogs all play a role in introducing humans to machines and achieving cohesive, harmonious infrastructures. We use the term human to human because these functions of IT process automation serve to imitate and mirror relationships.

Beyond the automation of workflows and other human to human interactions, the other two classifications of IT process automation involve more human to machine and machine to machine engagement. These types of actions might include things like database automation, patch management, job scheduling, capacity management and more. They also serve to further extend the capabilities of automation to areas like diagnostics and analytics.

Unlike automation technologies of the past, IT process automation has the potential to bridge the gaps between each of the above classes and create a seamless, highly efficient operation that supports ITIL best practices. A logical flow of events might include service management automation which leads to data center automation and ultimately ITSM automation, with increasing functionality at each step.

A word of caution, however, adopters of ITPA must be wary of automating in silos, which creates a fragmented and inefficient environment. Instead, all classes and areas of IT process automation should work in conjunction with one another to create and foster synergy across the board. This connectivity should be kept top of mind when designing and deploying any automation strategy.

Are you ready to start leveraging the power of automation to drive your organization forward? Download your free trial of eyeShare today to get started! 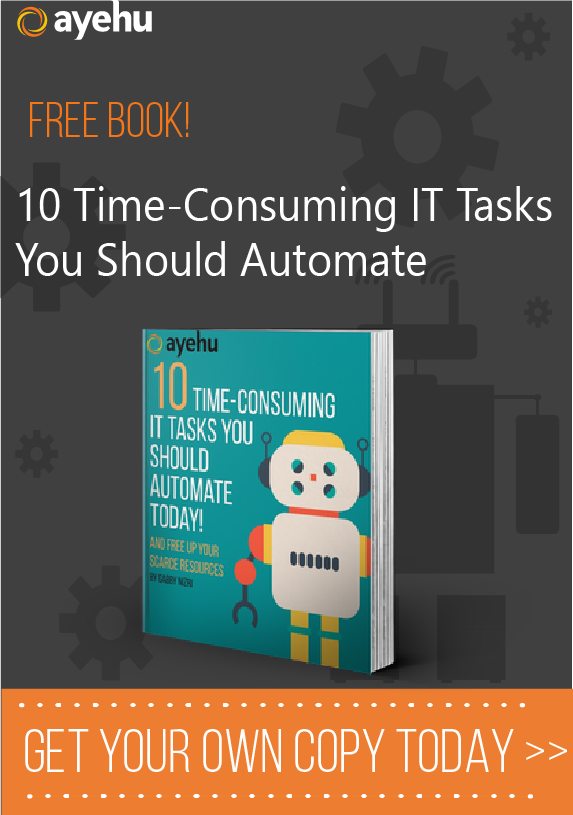 Gabby Nizri, Co-Founder, CEO of Ayehu With nearly 20 years’ experience in technology innovation, Gabby is the driving force behind Ayehu. His multidisciplinary background in product engineering, sales and professional services brings together key elements necessary to deliver the company’s IT process automation solution that has proven to be a force multiplier for businesses facing operational IT and cyber security challenges. Since co-founding the company, Gabby has advanced his thought leadership in IT automation and been dedicated to setting the company on a path to strong growth and validation. The Ayehu platform continues to earn accolades from customers, partners and industry experts including Gartner, Red Herring and Deloitte. Prior to founding Ayehu, Gabby held various operational and management positions at successful Israeli technology enterprises including Infogate Online Ltd, Webmaster and Walla Communications Ltd.
How IT Automation Might Just Save Your Job